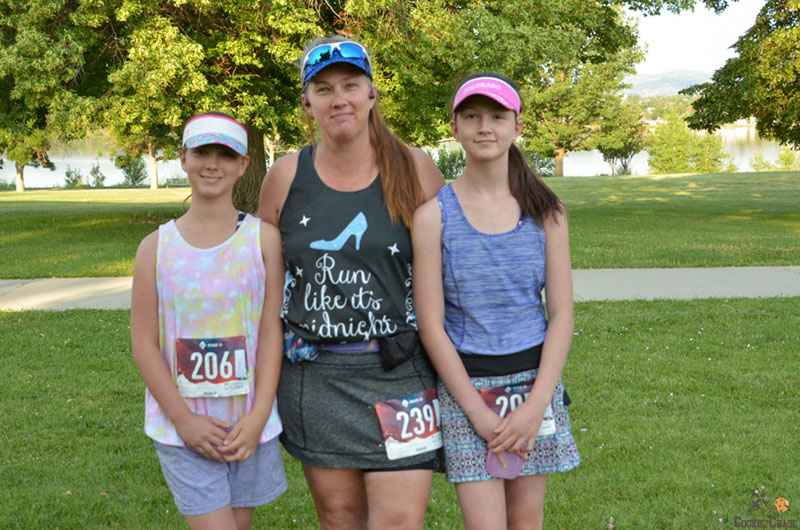 The night before started rough: hubby had food poison and threw up all night. He tried to get up and get ready (I thought he was crazy) but by the time he was dressed he realized he couldn’t possibly run a race. He went back to bed, we headed out for the race.

Two of my older teens volunteered for the race, and the two youngest had trained for the run. For training, hubby would run with them for a mile pacing them for speed, and I would alternate running them a slower full 5k for distance, for several weeks before the race.

The older girls helped with check-in and then were race officials at two of the turns.

We were there early since the girls were volunteering. This was the first race since last year where the waves were open (even though we signed up for the 7:30am start) and we were so grateful! The heat really kicked in at the end of our race, the heat was brutal by the 9:30 am start.

S and J ran together. They did a great job; even though people were passing them at the very start, they stuck with their plan to be consistent and run their own pace. Many of the people that passed them at the start, were passed later in the 5k. They finished with a 10:57 pace, which was right on track for their first self-paced race. They were 10th and 11th in their age groups (10-19 years is a rough age group, those kids are so fast!).

It was a fun race. After I finished, I went back to find my friends who were finishing up and walked the rest with them. They were there my very first race in 2013 (Rock ‘N’ Roll Half Marathon Denver).

This was our photo from my first race:

The older girls had to stay until the last finishers, so we found them on the course and cheered on the runners until the end.

Cheers to one more race to 50! The plan is to do the Crazy Horse Half Marathon on October 3rd….three weeks before my 50th birthday.