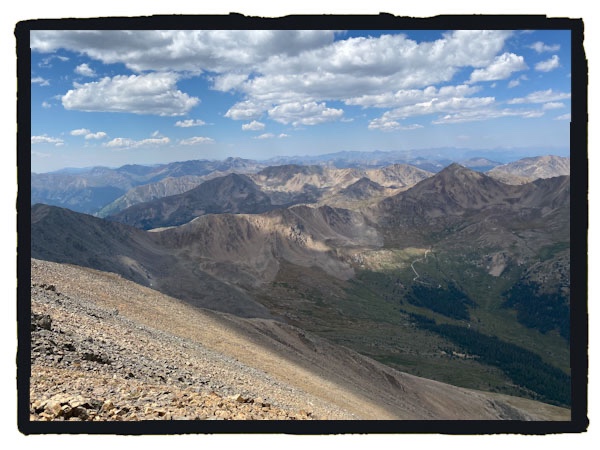 Climbing a 14er is a little like giving birth for me. In the “worst” of it, I say I will NEVER climb one again. Within a day or two, I’m ready to try a new challenge and am looking for possibilities.

This was our third 14er: we have summited Mt. Bierstadt (14,065′) and Mt. Democrat (14,148′) as well. We had planned to add Lincoln to the Democrat day, but by the time we got to the trailhead it was already late, hot, and clouds rolling in, so we had to get it done and get down again. We learned not to discount clouds after Bierstadt, when we started too late and ended up in a freak afternoon 5 minute rainstorm where my hair was standing on end and you could hear buzzing in the inner frame of our backpack. Bierstadt was very clear until early afternoon, when a cluster of clouds passed. Democrat appeared that a storm would eventually roll in, so we definitely blew our timing. Apparently we are very stubborn about learning our lesson about a sunrise start, but we did a much better job this time.

We stayed overnight closer to the trailhead this time (in a rental in Leadville), and we made it to the trail and on our feet by 6:34 a.m. We started at Lily Pond, turned left at the Colorado Trail for about a half mile, and then met up with the Mt. Elbert Trail at the point where there was 5 miles left to reach the summit.

You can tell in the photo I didn’t sleep well. We had two bedrooms and thus two beds, one was very hard, so at 1 a.m. I got up and switched to the softer bed. I’m always a little anxious the night before a big race or a big hike, so I kept playing the wakeup game wondering if I had overslept my alarm. That didn’t provide for a fruitful night of sleep.

The first 4 miles were actually pretty great. I felt really good, my breathing was pretty easy, we were making good time. Once we got above treeline, though, it started to get difficult.

I don’t have the best lungs. I never have, not even as a competitive gymnast from ages 5-18. I often wonder if it’s attributed to the pack-a-day smokers both my parents were my entire childhood, or just something more genetic. I have had to work hard at staying healthy and building my lung capacity, but it does seem to slow me down running and hiking.

Once above treeline, the breathing became very difficult. I was grateful I had packed a can of oxygen just in case; I didn’t need it the last two 14ers we summited, but this would be the highest 14er by around 300 feet in elevation.

I also struggled with fueling. Now that I’ve run many half marathons, a couple of marathons and a Dopey Challenge, I have really started to grasp the requirement of fueling. My problem was that when I’m hot, and working hard, I don’t WANT to eat. My stomach doesn’t like the food either.

Does anyone else get this way? When you are exerting and working hard, does your body just shut down and not want any food? Do you get nauseous with food? I do. I once met a woman on a bus (to the top of the pass for the Revel Rockies Half Marathon) who was running her first half marathon. She said she can’t fuel at all, not even prior, because she gets so sick. Though I’ve gotten better about half marathon fueling, I felt for her. It took me years to figure out what I can eat and not eat.

We had a protein shake and a banana before leaving the home rental at 5:30 a.m. We had brought boiled eggs with us and a wealth of energy bars (Ucan), but in the 6 miles and more than 4 hours of climbing, all we had eaten were a couple bites of a Ucan bar twice (I think hubby may have had a whole one overall and I had half overall) and a half dozen Honey Stinger bites (one package between us). This came to a total of about maybe 300 calories, and was truly not enough for our effort.

I began to feel nauseous some time after we passed treeline. Nausea can be a sign of many things: hunger, heat exhaustion, and altitude sickness. I know this, so first I took Nux Vomica to help ease the nausea, then I tried to force a Ucan bar down my throat. It all worked until I hit the last 1000 feet (of 4,000′) feet of climb. I couldn’t keep the nausea at bay, so I realized it was likely a little altitude sickness. I didn’t have a headache at all, and I didn’t feel like I would pass out and I wasn’t having cognitive difficulties, just extreme nausea, so I knew there were no dangers to continue.

The oxygen helped, I think I puffed it a total of 10 times. The last half mile of the climb, I literally had to walk 20-30 paces, stop and breathe until the nausea subsided, then start out again. That was when I started telling Hubby that I would likely never climb a 14er again.

I was honestly rather miserable. It was worse than childbirth, and I have given birth to five girls vaginally, the last two with no drugs at all. I tore with all five children, needed stitches, and with my last I experienced hemorrhaging with clots the size of softballs from an internal tear. Okay, maybe it wasn’t worse, but it ranks up there. The one thing that kept me going–like with childbirth–is you know it will eventually end and the result will be a great feeling of accomplishment.

The mind is a funny thing. The pain and effort weren’t a big deal to me, I often experience pain the last miles of a half or full marathon and you just push through. What caused the biggest–I would say fear–was how hard it was to breathe. My legs and body were more than willing and capable, but my lungs were screaming at me. When you feel like you are breathing through a straw, it causes minor panic. And with every step I just kept wondering if I would make it to the top.

The top was GLORIOUS!

Despite the fact that so many people passed me the last half mile of the hike (and it was hard on my ego), I still persisted; and even though those same people were at the top who passed me, it still felt like we were all a part of the same group that conquered the same mountain, no matter your speed.

I told hubby that once we got to the top, we were coming RIGHT BACK DOWN. There would be no hanging around at the top. I said this in the midst of serious breathing issues, afraid I wouldn’t be able to breathe once at the top. Funny thing: once we were at the summit, sat down and rested a bit, I felt GREAT. I wasn’t having issues breathing anymore (of course I also wasn’t exerting like before) and the view was so very amazing I didn’t want to leave right away.

We facetimed with our 2nd daughter A, and with one of my friends, at the top of the mountain. The service is great up at the highest point in Colorado. A really cool boy (about 10 years old) had hiked up with his mom and took pictures for us. I really enjoyed all of his fun facts about jet streams and distances and altitude and his overall enthusiasm about the hike. I wish I would’ve gotten a picture of him, but I didn’t want to seem like a creepy adult.

The sign we are holding is a manufactured water proof sign for everyone to use for photos. Even though it says 14,433′, I would like to point out that “it gained seven feet to 14,440 feet in an elevation survey conducted by the U.S. Geological Survey in 1993. It has a prominence of 9,073 feet.”

We spent about 30 minutes at the top. I ate a little more than half a PB&J sandwich I had prepared (hubby had his and the rest of mine) and drank some water. I still didn’t feel like I could eat much, though I really should have. Half a sandwich was about all I could handle.

As we were deciding to go, a couple people started smoking pot. That sealed it for us. I’m not a fan of smokers–cigarette or pot–as we don’t have a choice but to share in their smoke. Having breathing issues already, it was time to go. I also think the smell is pretty nasty (I equate it to the Maned Wolf smell so prominent in the Denver Zoo near the habitat).

The first 4 miles back down were, again, great. I honestly didn’t get the concept of how steep it really was until we were going down, gripping the ground with our toes as to not slide. In some places where it seemed “flat,” it really was not, and by mile four on the way back down my knees were sore. My hips were sore. Ironically, my calves were fine.

When we got to the turn for the Colorado Trail, my right knee was in serious pain. I downed some arnica and some leg cramp homeopathics and muscled on.

The leaves were starting to turn the two days we were there. Only a few so far, but the signs of Autumn are here!

Back at the Jeep we were elated! We were also SOOO hungry. But our first stop was the hot tub back at the rental. After a good soak (and ouch on our sunburns), we were finally ready to eat.

What do you eat after a good hike?? Do you eat a treat?

We could only find a Chinese food restaurant available for takeout (we both had Mongolian Beef) and picked up some beer. I managed to drink most of one beer before deciding I really just wanted to turn in!

That’s my story of our third Fourteener here in Colorado. I’m honestly not sure when I will next climb another; I know my husband is itching to do another, so I will guess next summer.