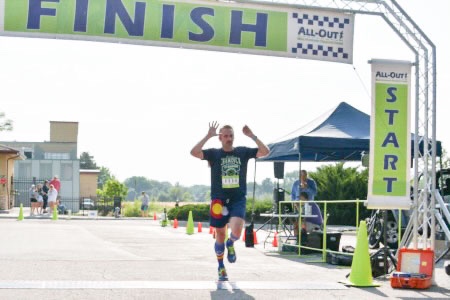 A couple years ago, my husband realized he could easily reach 50 half marathons before his 50th birthday. It then became a goal to be sure he reached 50.

We average 2-3 half marathons per year, but when the restrictions hit in 2020, we found 3 of our 4 scheduled half marathons CANCELLED. We had just finished the Dopey Challenge in mid-January (a 5k, 10k, 13.1 mi, 26.2 mi) and he was well on his way toward his goal.

We had a half marathon scheduled in April in Kansas City, MO. Two weeks before the event, the Garmin organizers decided that since they couldn’t have the finish line celebration they wanted, they would postpone it until October. That would have been hubby’s 49th Half, the 50th half would have been the Mickelson Trail Half, but now we were scrambling to figure out how to find another half he could run.

We found the Runapalooza Half Marathon in Arvada, put on by Allout Multicourse Productions. We’ve run a couple of their races in the past. This time, I wouldn’t run the course, we would be there solely for hubby’s finish.

The weather was perfect for a run. It stayed mostly cloudy and cool. The girls and I set up between the finish line and the first segment, so we could see him run out, come back AND finish. We brought our cowbells and cheered until the last runner finished.

We had donuts at the finish and invited a few people to celebrate. (My donuts were pretty before they were smashed by a bottle of juice my child put on top of the donuts).

Shane finished with an age group award: 3rd in the 40-49. Not a bad way to finish his very last race in the 40-49 age group! His 50th Birthday was two days after the race.

I really like their AG award; it’s a medal cylinder you place over the medal ribbon.

Happy 50th Half Marathon Shane! We are so proud of you!